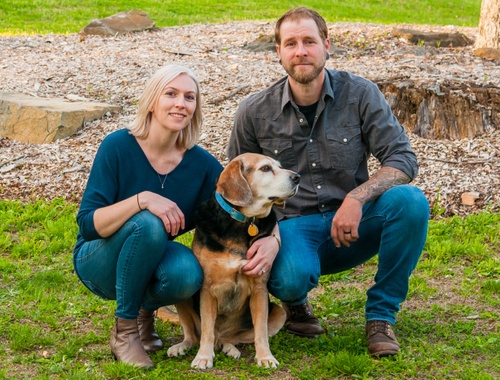 December did not begin easy for us.  Our dear kitty Scarlett had to have surgery to remove reoccurring cancer.  She has a very rare type of cancer for cats that most vets have never seen except in dogs.  She made it out of her surgery like a champion but her recovery did not go as well.  Scarlett had to spend 3 weeks with a cone on her head which she did not do well with and could not be left alone unsupervised.  Chloe spent time working from home to keep her happy and comfortable and Jason slept on the floor of our office every night with her until she was healed, she is just a little spoiled……  Once the cone was off and her stiches were out she was back to herself!

We surprised Jason’s mom for her birthday.  His stepdad had made reservations at a nice place not too far from us and we told her we couldn’t make it but there we were in the loby waiting for her to enter.  It made her night!  The following weekend Jason’s new band had their first show.  They played with a few of our friend’s bands that night also.  It was great to see them all on stage together doing what they do best.

Chloe spent a lot of time screen printing towel’s for gifts for the family as well as to sell.  She cranked out a ton for customers which kept her busy during the cat’s long recovery (took almost all month to recover).  Jason’s stephbrother and his girlfriend drove up from Myrtle Beach for the holiday so we got to host a family dinner and get to spend as much time with them as we could.  The holiday was spread out between many houses throughout the week.  We finished the month celebrating one of our best friend’s birthdays with a group of friends.  It seems like fall and winter are non-stop holidays and birthdays, we love it!!!