Ending July with a bang 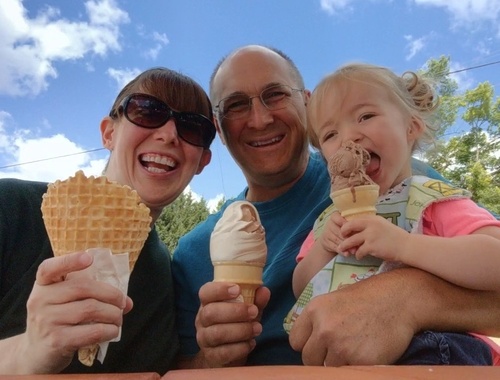 The last weekend in July was so busy and so much fun. We had a birthday party for our nephew on Thursday and then we went up north for the weekend. Mackinaw Island is a special place for Tim and me; we took our first vacation together there and then returned for our honeymoon. Now we try to go back every year. This year was our daughter, Isabella (AKA Ibbi), first trip.

We broke up the driving by stopping at Burt Lake near Indian River and had a picnic in the state park. Of course, we couldn’t leave without letting Ibbi splash around at the beach. She had a blast! She absolutely loves the water.

At Mackinaw, we hiked up to the Governor’s mansion and then walked some new trails in the island’s interior. We spent the morning on the top of the island and the afternoon around the perimeter. Another first for this year’s trip was a stop at the playground. This might have been Ibbi’s favorite part (or maybe it was the horses). It was fun seeing one of our favorite places through our daughter’s eyes.

As we were leaving St. Ignace, we stopped at the Wawatam lighthouse. Tim and I have visited several light houses in multiple states, but this was our daughter’s first time. Walking down the pier towards the lighthouse, there is a little sitting area that has a splash park. Ibbi was so excited! She had so much fun splashing around that she didn’t want to walk the rest of the way down the pier to the light house. She did have fun looking at the light house but was very excited to see the splash park again on the way back to the car. Oh my goodness, was she soaked! We didn’t know there was a splash park until we were walking past it, so she was just dressed in her clothes. It’s a good thing we had a spare outfit to change her into when we got back to the car. It was worth it though to see how much fun she had.