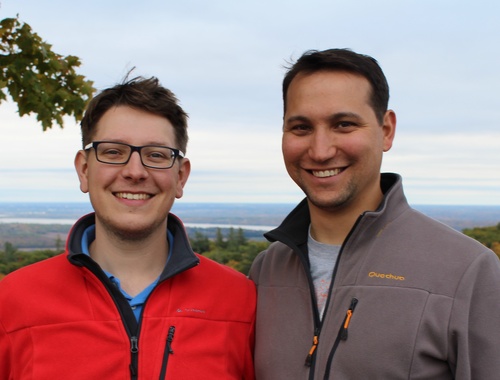 For the Holidays, Francis’s mom came to visit us. We went on a trip North-East to visit Quebec City together. Three humans and two dogs: Lulu, our dog, and Lia, our friend’s dog that we were dog-sitting.

On our way to Quebec City! Did you spot Lia?

Quebec City is the capital of the Canadian province of Quebec, in Canada. We saw the Frontenac Castle, impossible to miss, as it is the biggest building in the city. We also visited the citadelle, with its ramparts.

Francis, Francis’s mom, and Xavier, blinded by the sunlight

Stunning Frontenac Castle and the Old Quebec City from the ramparts

Entry to the city through a medieval gate

It really looks like an old medieval city in Europe! We had a great time, even though is was freezing. Like really freezing!

Francis and his maman, with Lulu (our dog) and Lia (our friend’s dog)

Francis’s mom stayed with us for two weeks, and promised she would jump again on a plane as soon as possible!