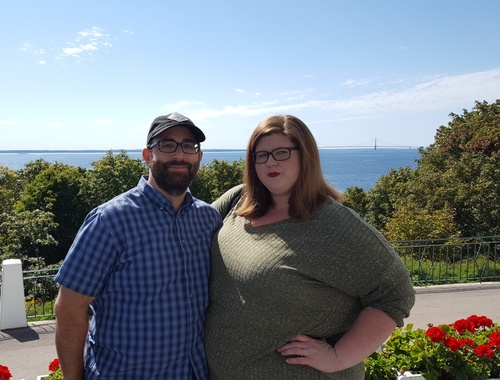 We have had a busy couple of weeks for us. I have been baking up a storm:

I have also begun making plans and preparations to send our friend, who is on his rotation in Jordan/Syria a box of goodies, which I’m hoping to get sent out in the next couple of weeks or so!

Matthew has been busily working and he’s recently begun work on one of our guest bedrooms, which is in serious need of work. This is a project that will keep both of us plenty occupied over the next few weeks/months, and we hope to have it finished by Halloween…if not sooner.

We have also been spending time with Gatsby, either outside (if it’s cool enough):

Gatsby likes to go in the front yard with us. He often plays hide and seek in the hydrangeas!

Or inside hanging out in our library:

Gearing up for Game of Thrones and enjoying animal crackers…while Gatsby gives us sad eyes. (He totally got a cookie)

We’ve also been spending some time in the basement, the coolest (temperature wise) place in the house. Believe it or not, Matthew and I have both been hitting the treadmill fairly regularly (always begrudgingly) and decide to hook up the WII downstairs so we can throw it back and have some fun with that as well!

Today, we played a few rounds of tennis (we won a set of 3 and lost a set of 3) and a round of bowling (I beat Matthew!). Gatsby mostly laid around or looked at us like we were nutters!

Check back soon, to see what we’ve been up to. I’m sure it will be more baking!