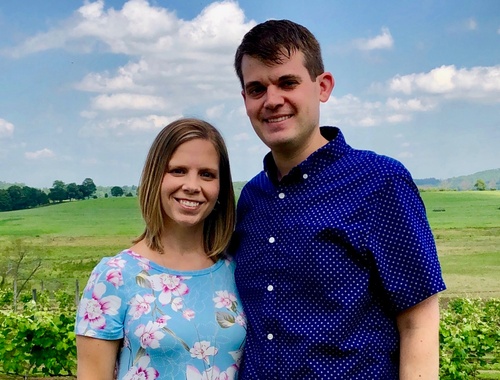 We like to say that our love story began on the football field. During the summer of 2006, Jason took a job as a high school music teacher and band director. It also happened to be the same district where Erin worked as a teacher and the band’s color guard advisor. We spent a lot of time together that fall, both on and off the football field, and quickly learned that we had a lot in common. Rehearsals, games, and competitions soon led to dinners and date nights. Jason’s career path has evolved over time, but we still find ways to keep music a regular part of our lives. We can’t wait to share this passion with a child someday!

A few shots from our marching band days. We’ve spent many “date nights” on the football field!

Jason singing “Love of My Life” at our wedding. We still have this special piece of music framed and hanging in our bedroom. Jason’s musical talent was just one of many things that drew Erin to him!

We are members of several musical ensembles in our area, including our town’s community band. Erin sticks to playing the clarinet, while Jason has gone from back-row tuba player to director. The band plays at many local events throughout the summer and Christmas season. Jason loves conducting, as well as telling corny jokes when he has the microphone… 🙂 Once a baby comes along, Erin will be the one to temporarily take a step back from playing, but the hope is for her and a little one to still be part of the cheering section!

This fall we had the opportunity to attend our district’s alumni band celebration. As a former director, Jason was honored with a special gift. It was so much fun to return to the place where our love story began- 12 years ago!

We also love attending concerts and musicals whenever we get the chance. We can’t wait to expose a little one to various cultural opportunities in the future!