Why we want to adopt… 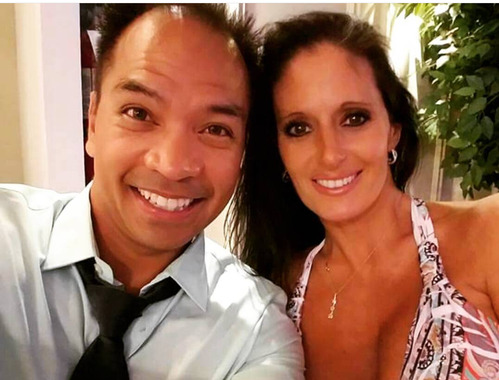 We honestly don’t even know where to start, so we’ll start from the beginning…

We met when Ricardo came to this country from the Philippines. He wound up in my elementary school and we became friends. We wound up always being together, but never dated and went to our Senior Prom together. We were both so afraid of telling the other our feelings, but everyone else knew it. We lost touch, 16 years had passed and we reconnected. It was again, love at first re-sight!

Two years later we were married, both of us for the first time at 37 years old. I got pregnant right after the honeymoon and it was ectopic and almost killed me.  I lost a fallopian tube, and apparently the remaining one does not work properly either. With my age being an issue, after 6 months of trying, we went right into IVF. 2 rounds of artificial insemination, 7 rounds of IVF, 1 miscarriage and almost 3 years, we had had enough and basically gave up on the idea of me having a baby.

We decided to keep “trying” on our own with the idea that if it happens, it happens! We were just going with it and trying to recoup our losses financially. The whole time talking about surrogacy or adoption. We have decided that surrogacy is way too expensive and the fact that there are so many babies born every year that are placed up for adoption, we decided that adoption was the route we were going to take, once we were ready.

We have traveled the world, this country and have been married almost 8 years now and have done all the fun, crazy things that come with being happily married to your best friend, without any kids. We have lived and loved and experienced so many things, and now that we are both 45, we believe that there is no better time to adopt! We’re not getting any younger!

We don’t want to say that something is “missing” from our lives, but something IS missing if that makes any sense.  Our home is still a home without a baby or babies, but yet at the same time, it is incomplete. We haven’t stopped talking about a baby or babies since we made the decision to start this process. Names, the nursery, the baby shower, our schedules, how life will change, everything! We are so beyond ready and excited for this!

We feel that this is plan that the “big man upstairs” has for us…he probably had this plan for us from day one! We both have so much crazy, insane love to give, that we don’t need our own children biologically, we need to adopt a baby or babies! We also plan on adopting at least 2 babies, either twins or another single baby within 2 years so they have a sibling!